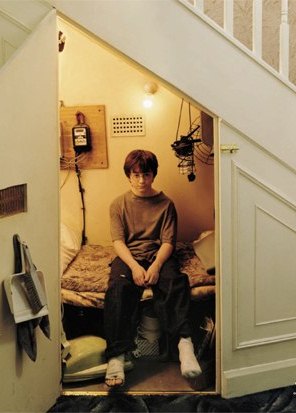 A character who, for one reason or another, is living in another character's wardrobe/closet. For some reason, the "tenant" is usually a child of some sort. Happens a lot in anime, apparently because in Japan some people do indeed spend time in their closets during certain types of weather. That's half the reason why even smaller houses have big closets. Of course, apartments and capsules in Japan don't have closets at all.

In addition, following from Trope Codifier Urusei Yatsura, it's a way to allow the Magical Girlfriend to live with The Protagonist without the two having to share a room.

This can be a more extreme form of Bad Bedroom, Bad Life if the character's in the closet by force.