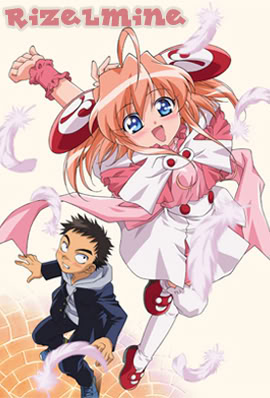 Tomonori Iwaki is in his third year of middle school, and is depressed that his homeroom teacher Natsumi Ibata, who he's had a crush on, is getting married. He comes home from school, only to be greeted by a little girl calling him "Darling" and suddenly declaring herself to be his wife... and her three secret agent "dads", who have been assigned to protect her. As much as he dislikes Rizel (who has rubbed him off the wrong way after coming to him while depressed), he realizes he has to be really careful not to make this girl angry or sad — her tears contain nitroglycerin and can blow the Iwaki household to smithereens!

Throw in a Love Dodecahedron and a generous helping of comedic mischief (and a fair amount of drama, of course) and we get this crazy Magical Girlfriend manga written and illustrated by Yukiru Sugisaki, the same woman behind D.N.Angel, published between 2001-2002 under Monthly Ace Next, with a 2-cour anime adaptation in 2001 courtesy of MADHOUSE and IMAGIN.

Rizelmine is the girlfriend to the following tropes.