Film / He Died with a Felafel in His Hand 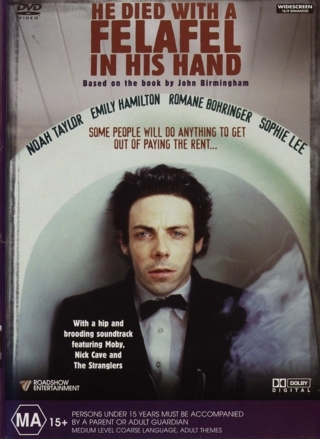 A search for love, meaning and bathroom solitude, with a lot of random shit happening in the meantime.

He Died with a Felafel in His Hand (2001) is a flamboyantly pointless housemates-from-hell story, based on a book by John Birmingham. Despite mediocre circulation, it's become something of a Cult Classic among unemployed yobbos, leftist uni students, and anybody else who's experienced the joys of shared-house living in Australia. Memorable mainly for that scene in backyard Brisbane, plus a kick-arse soundtrack full of Australian artists and snappy writing that makes it the most quotable text since Oscar Wilde.

Stars Noah Taylor, Emily Hamilton and, for some reason, Romane Bohringer. And while most of the people described in the page quote show up in the film, all of them show up in the book.