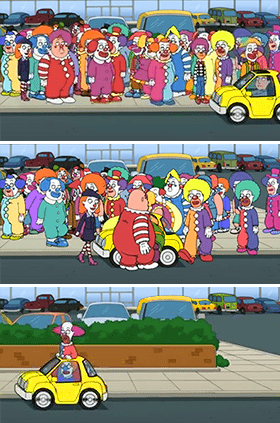 Hope you don't have claustrophobia — or coulrophobia.
Advertisement:

A Clown Car is a vehicle that (in addition to being the transport of choice for a clown) holds (or seems to hold) far more occupants than it physically can, leading observers to believe that it's Bigger on the Inside.

First used in the Cole Brothers Circus in the 1950's in a circus clown routine. When performed in Real Life, the effect is accomplished by stripping a vehicle of its seats and packing the performers inside.

Compare Clown Car Base (for the structural version), Bag of Holding (when it's a bag or container), Clown-Car Grave (for a tomb with similar properties) and Bigger on the Inside (when the viewer can see the vehicle's interior). Contrast Misleading Package Size.