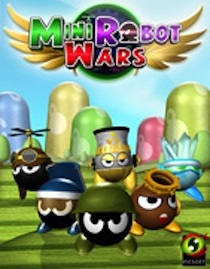 Mini Robot Wars is a Tower Defense game that is similar to Plants vs. Zombies. In it, a bunch of Metool-lookalike Mechanical Lifeforms try to stop an invasion of their planet.

"The Machines" are an army of killer robots produced by Star Travel Inc. Their mission is to find planets to provide a suitable place to build space resorts for wealthy people. They have recently found "Green Planet", a planet with lush forests, oceans and mountains.

However, the planet is not uninhabited- a bunch of small alien robots named the Minirobots inhabit it. Being peace-loving creatures, the Minirobots are not prepared against the machine invasion, and were mostly captured or destroyed. This is the Minirobots' last chance to drive out Star Travel's machines.

Similar to Plants vs. Zombies, you place troops on the battlefield to prevent enemy robots from reaching the other side. There is a twist, though- instead of a top-down view, you play in a side-view similar to a platform game.

The game has a sequel in Tiny Defense 2, where Star Travel Inc.'s machines attack the Minirobot planet yet again, and the Minirobots have to fend them off.

This game is not a chibi-fied version of Super Robot Wars.