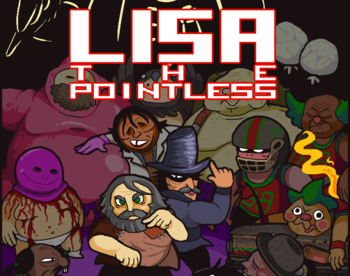 "I only know what I've seen."
Do you believe in... SIN? Can you even comprehend such a thing?
Advertisement:

LISA: The Pointless is a fan-made Interquel to LISA by Lithuanian developer Edvinas Kandrotas. It holds the notable distinction of being one of the few LISA fan project to come to fruition.

You play as Alex Churchland, a failed martial artist and former garbage man. Alex has been been beaten half to death for unknown reasons and left to die on Garbage Island, a landfill featured briefly in the original game. He is rescued by a man named Joel, an amiable scavenger looking for a specially-made bullet for his ancestral pistol. Upon finding said bullet near where Alex was lying, Joel nurses Alex back to health and agrees to accompany him on his travels. From there, Alex resolves to get off of Garbage Island and find a place where he can live a life free of trash and violence. The duo are enticed by rumors of "the city," a semi-legendary utopia somewhere out in the wastes of Olathe. In their quest to locate the city, the duo are hounded at every corner by Garbage Island's surlier residents, the grisly Infinity Franchise, as well as the usual thugs and perverts that are endemic to Olathe. With little to their names but the rags on their backs, a single bullet, and whatever meager supplies they can get their hands on, Alex and Joel have a long road ahead of them...

The gameplay is mostly the same as that of the Painful RPG, although there are a few notable changes. The difficulty is significantly ramped up, with save points being less common, items being in shorter supply, and enemies hitting much harder than before. It's imperative that you carefully manage your items as well as Alex and Joel's abilities. Even the most basic enemies are capable of killing the duo if you're not operating at the top of your game.