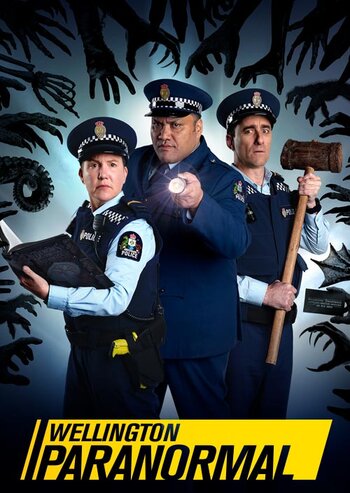 Wellington Paranormal is a Comedy Horror Mockumentary series and Spin-Off of the film What We Do in the Shadows. The film's creators, Taika Waititi and Jemaine Clement, serve as executive producers on the series, and Clement has additionally directed some of the first season's episodes.

Shot in the style of police reality shows, the two Wellington police officers who followed up a noise complaint in the vampires' flat in the original film, Officers Kyle Minogue and O'Leary, tackle paranormal crime on their new assignment to Sergeant Ruawai Maaka's paranormal unit.

The show premiered in 2018 and ran for four seasons for a total of 25 episodes. In 2021, the series was picked up by The CW and HBO Max for a US release that summer, with episodes premiering first on The CW and arriving on HBO Max the following day.