Film / What We Do in the Shadows 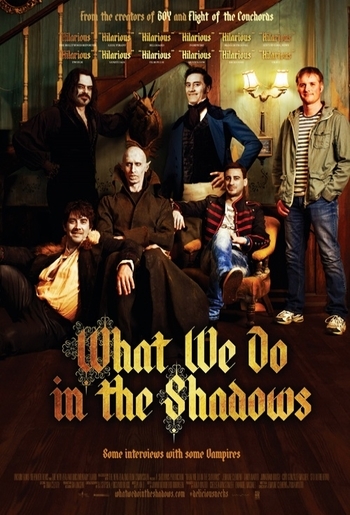 "Some interviews with some Vampires."
"Vampires have had a pretty bad rep. We're not these mopey old creatures who live in castles. Well, most of us are... a lot are, but... There are those of us who like to flat together in small countries like New Zealand."
— Viago

What We Do in the Shadows is a Black Comedy Horror Mockumentary which follows three colorful, but lovable vampire flatmates: Viago, Deacon, and Vladislav, in their struggles to fit into modern-day Wellington society. When their eight-thousand-year-old extra flatmate Petyr (pronounced "Peter") attacks and turns twenty-something hipster Nick into a vampire, the guys must teach him the ropes of vampirism and guide him through his newfound eternal life. In turn, they are forced to learn a thing or two about modern society including technology, the Internet, and proper clubbing.

The film was co-directed as well as co-written by Taika Waititi (of Boy) and Jemaine Clement (of Flight of the Conchords), who both co-star. It was released in its home country, New Zealand, as well as a few others in 2014. It later met a limited release in the States in early 2015.

A Spin-Off series based around the two police officers O'Leary and Minogue, called Wellington Paranormal, premiered in 2018.

An American series based on the film called What We Do in the Shadows, headed by Waititi and Clement, premiered on March 27, 2019 on FX. The show takes place in the same continuity as the film, but relocated to New York City and focusing on a different group of characters.