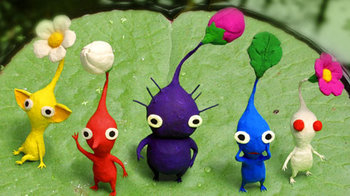 "An intellectual carrot... the mind boggles."
— The Thing from Another World

Aliens aren't just made of meat. Whether dumb, talkative or even singing, plant-based aliens have been a staple of movies, films and TV for decades. There are even a few based on fungi, which are just as sessile

, despite being very different from plants. They're actually much more closely related to animals, but if you've got walking talking mushrooms, why worry about a little thing like that?

On a side note, plant aliens are nearly always mobile and/or sentient, traits that pretty much defeat the point of belonging to a kingdom whose feeding methods do not rely on looking for other organisms to eat (and raises the question where they get all the extra energy from). Then again, what can you expect from Fantastic Flora?

May cross over with Plant Mooks if the characters are treated as disposable cannon fodder. Compare Plant Person, Planimal.