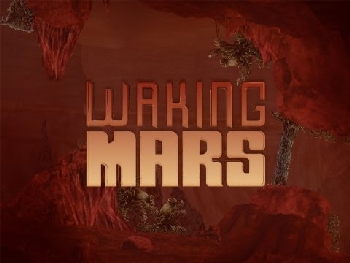 The Red Planet just got a whole lot less dead.
"The red planet was silent as I thought my way through my problem. No battle robots attacked me."
— Robert Florence,Rock Paper Shotgun, describing this game

Waking Mars is a Puzzle Platformer for iOS, Android, PC and Linux systems released in 2012 by Tiger Style Games.

You play a scientist/astronaut named Liang, part of a research team based on Mars. You are tasked with researching Martian life forms discovered in a cave a year previously. 0CT0, the mobile probe that made the original discovery, is now missing, presumably deeper down. It's not long before you discover your path blocked by biological barriers seemingly grown in place. To open them, you'll need to plant seeds of the resident plantlike life, called Zoa, in suitable patches of soil to grow new specimens. Growing Zoa increases the amount of organic life in cave, called Biomass, causing the barriers to open to other parts of the cavern. Sounds easy, right? But this can't be done by simply throwing whatever at wherever. You must utilize the unique interactions between the various species of Zoa in order to optimize and balance the ecosystem while maximizing biomass. As Liang delves deeper into the caves, it becomes evident that there is something much bigger than some alien plants sleeping beneath the surface.

Now get back into that cave!