Literature / Speaker for the Dead 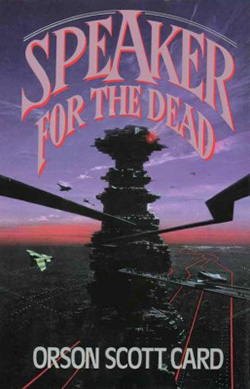 Speaker for the Dead is the first sequel for Ender's Game, written in 1986 by Orson Scott Card. Followed by Xenocide and Children of the Mind.

Thousands of years after the events of Ender's Game, humanity has managed to find only one other alien species in the known universe: the Pequeninos on the planet Lusitania. The Pequeninos, or "Piggies" as they are nicknamed, have a not fully understood culture involving the flora of Lusitania, and the small human population on the planet is dedicated to researching them and the planet. Lusitania is also home to the Descolada, a disease that is deadly to humans but harmless to the Piggies.

One of the Pequeninos researchers, Pipo, discovers a link between the Piggies and the Descolada and goes to talk to the Piggies about it, and is later found ritually murdered in a manner similar to how the Piggies kill their own. Pipo's son Libo wants to know what it was that his father discovered, but childhood friend and fellow researcher Novinha locks Pipo's research so that Libo won't meet the same fate as his father. Unfortunately, it doesn't work. Novinha then makes a request for a Speaker for the Dead for Pipo. A Speaker for the Dead is a sort of professional eulogizer, someone who investigates the life of their dead subject to try and understand their life—and then explains the life and character of their subject in blunt, honest terms, without leaving anything out.

The Speaker Novinha gets is none other than Ender Wiggin, who is still alive thanks to Time Dilation. In the time since the first book Ender is remembered for the xenocide of the Bugger species, so he goes by the name Andrew. Ender travels to Lusitania with his AI friend Jane, but discovers that Novinha has since tried to have the order cancelled in the twenty-two year interim. Novinha's children, however, want a Speaker for Libo and their own father Marcos, who died recently. In the course of his investigation, Ender then discovers the secret of the Pequeninos, and the secrets behind the tragic mess that made up Novinha, Libo, Pipo, and Marcos's life.

Speaker for the Dead provides examples of: