Literature / Children of the Mind 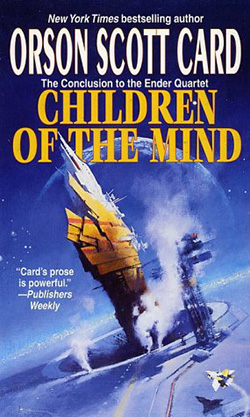 Children of the Mind is the fourth and originally final book in the Ender's Game saga, written by Orson Scott Card and published in 1996.

The Starways Congress fleet is almost at Lusitania with the Little Doctor device, Jane is using her new found teleportation powers to get everyone offworld, and Peter Wiggin and Si Wang-Mu are trying to persuade members of the Congress to rescind the order to blow Lusitania up.

Children of the Mind provides examples of: