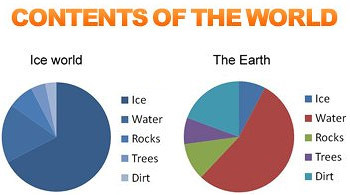 Earth and a Slippy-Slidey Ice World have quite the differences.
Imperial Officer: Lord Vader, the rebels have fled the ice planet of Hoth. After going to the swamp planet of Dagobah, Skywalker has rejoined his friends on the desert world of Tatooine. And now the rebel fleet is massing for an attack on the forest moon of Endor.
Darth Vader: I sense a great disturbance in the Force.
Imperial Officer: My lord?
Darth Vader: How else can so many worlds be totally covered with only one terrain type without regard to latitudinal variations?
— Irregular Webcomic!, #87

Earth is a wonderfully varied place with an amazingly diverse biosphere. On this single planet, you can find jungles, mountains, forests, deserts, prairies... we must be the most varied planet in the universe. Or you'd think so after seeing so many alien worlds trapped in solitary, homogeneous landscapes.

Many other planets and natural satellites will often be defined by a single setting. It doesn't matter if the events of the story only take place on a small portion of the planet — we are still told the entire planet has one climate; specifically, the same climate as where the story takes place. Very rarely does any planet have the same level of environmental diversity as Earth, despite being as large and having a normal orbit. In addition, beyond having simply uniform surface biomes, these planets often have a single ecological community over their entire surfaces — a swamp planet, for instance, isn't just covered by swamps, it's covered by the exact same swamp everywhere, with precisely the same native plants and creatures. For this reason, alien creatures are often simply described as being native to Planet Such-and-Such, rather than to any specific location on it, with the assumption that you'd find them regardless of what spot you landed on.

This is and ecological equivalent to the Planet of Hats, and the locals will often have a hat that resembles the human cultures that inhabit similar environments.

A creature well-suited to the local environment may be upgraded to horse status, if it's big enough.

It should perhaps be noted that we usually only get very small views of these planets. Many times there are lines to the effect that it is a fairly standard planet. Almost never are we shown or told that a planet is entirely a Single Biome Planet in television or movies, and the ones that are are almost always either very temperate, tropical, desert, ice, or water worlds, which all have a statistical probability of existing. We have several of them in our own solar system, in fact, missing only a breathable atmosphere.

Earth itself could fairly be considered a water planet. In its history, it has been an Ice planet more than once, though, as well as periods when most of the landmass was Desert (early Mesozoic) and of nearly uniform lush growth (mid-Mesozoic)note Studies have shown, however, that Mesozoic climates were far more diverse than previously thought. For instance, we have evidence of early Cretaceous glaciations. By similar standards, Mercury could be a Desert Planet, Venus a Cloud/Volcano Planet, and Mars another Desert Planet (a cold desert this time). If you allow the moons of the gas giants, you also have Io (a Volcano Planetoid — it has been said that the entire surface of the moon is repaved in just three years by volcanic activity) and numerous Ice Planetoids (such as Europa and Enceladus). Most of the outer solar system dwarf-planets are also Ice Planetoidsnote And it's not just water ice, but also ammonia ice (also methane, carbon dioxide and such).

Note that a Single Biome Planet is not necessarily a single climate planet. Even on planets and moons lacking atmospheres, there are bound to be variations in temperature due to latitude if the planet or moon receives a significant amount of radiant heat from a star. A planet or moon with atmosphere will of course have much more complex weather patterns due to wind and precipitation.

Contrast Patchwork Map. Near the polar opposite of All Planets Are Earthlike. May overlap with One-Product Planet. See also Planetville. Works in which Venus Is Wet frequently depict it as a Jungle Planet, an Ocean Planet, or a Swamp Planet.