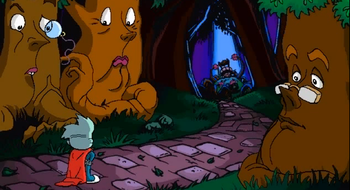 "Not that intelligent. I played Trivial Pursuit with them, and they were all stumped."
"My mind is the spread of the canopy. My heart is the embrace of the roots. I am deathless Llanowar, its fury and its peace."
— Molimo, Maro-Sorcerer, Magic: The Gathering
Advertisement:

Some trees are wise, but sometimes they aren't smart enough. At least, alone. With a forest, these trees can act as a sort of neural network, creating a collective consciousness. An arboreal brain. Plants have roots, and roots kind of look like neurons, so perhaps that comparison is why the idea of a sentient forest is a thing.

These neural roots can be considered both a Genius Loci and Hive Mind, being both a sentient location and a meld of hundreds or thousands of individual minds. It might explain why the jungle or forest is trying to kill you; the whole thing's an intelligent environment and doesn't take kindly to trespassers. If it's just a single intelligent tree, its a Wise Tree.