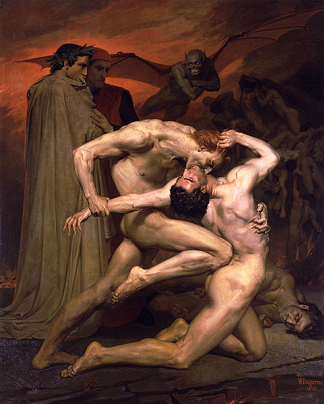 Homo homini lupus est.note Man is a wolf to man.
"See, their morals, their 'code'... it's a bad joke, dropped at the first sign of trouble. They're only as good as the world allows them to be. I'll show ya. When the chips are down, these, uh, these 'civilized people', they'll eat each other."
— The Joker, The Dark Knight
Advertisement:

In essence Humans Are Bastards is the reverse of Rousseau Was Right — the natural proclivity of humanity is towards selfishness, apathy and violence. Only a select few people manage to rise above their base nature to become something better, but the kernel of darkness is still In the Blood. When Humans Are Bastards is in effect, even your "heroes" don't have clean hands, so most conflict is gray against black, with some gray against gray or black against black on for variety. Frequently used by Omnicidal Maniacs as an argument in favor of a Class 3a Apocalypse.

Humans being bastards doesn't preclude them being pragmatic about it, so if there isn't a profit to be made by making the world a hellhole, they might not, but if conditions are tolerable it certainly isn't due to any inborn altruism on the part of those in charge. Appeals to people's better nature will not work. Don't expect to see anyone shame the mob — idealism has no place here. Any successful do-gooders will be very, very cynical and paranoid, as the genuinely hopeful will inevitably become embittered if they're not killed outright.

Very, very far down the cynical side of the Sliding Scale of Idealism Versus Cynicism, and all but guarantees a Crapsack World if this is true of the majority of the population. Comedies are black. Dramas are depressing. Beware of Too Bleak, Stopped Caring.

Compare Crapsack World, Black-and-Gray Morality. Compare World of Jerkass, where all the characters are jerks, but there isn't necessarily a moral about humanity at large. Hobbes Was Right often makes an appearance, proposing that if the bastardy of humanity is a constant, the most effective form of government is tyranny. On the other hand, the exact opposite stance may be taken as well: if humans are inherently bastards, then it's no use giving any of them power, because they will all inevitably abuse it.

Contrast Humans Are Good, Rousseau Was Right and White-and-Grey Morality. See also Humans Are Flawed, which takes the middle road by acknowledging humanity's shortcomings while not underplaying their potential capacity for virtue.

For settings where humans are depicted as bastards compared to other sapient species, see Humans Are the Real Monsters.

No Real Life Examples, Please! We don't need any elaboration of all the bad things humans have done.