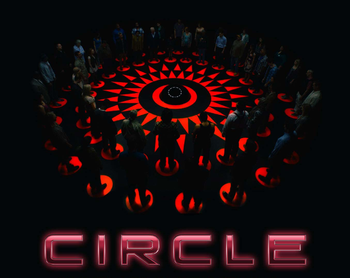 In here...everything gets you killed.
Advertisement:

Circle (2015) is an American Psychological Thriller film directed by Aaron Hann and Mario Miscione. It stars Carter Jenkins, Julie Benz, Lawrence Kao, Allegra Masters, and many others in an ensemble cast.

Fifty people wake up in a darkened room, all strangers from all walks of life, arranged in a circle around a sinister device that kills one of them every two minutes, or if any of them try to leave. Before long, they figure out that they can influence which person the device kills next... and the debate of whose life is worthy of saving begins in earnest.

Not to be confused with works titled The Circle.