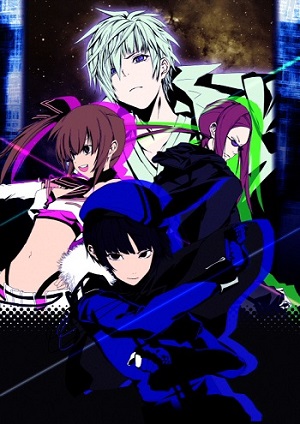 "It's a story from long, long ago — Fortuna was born in the nook of a small village. Ever since she was born she never stopped crying. Her wailing voice caused many people to suffer. If she didn't stop her wails would eventually cover the entire world. "Fortuna will surely be gone in 100 years time" The people held to that hope and entrusted it to the distant skies. The people ran from the ark known as Earth... And so Fortuna, who was all alone, cried until she took her final breath. — In this way, the old world came to an end. And a new world, began."
— Senko no Ronde's opening
Advertisement:

Senko no Ronde is a bullet hell Shoot 'Em Up-meets-Fighting Game produced by G.rev and arguably one of their most ambitious titles, as the team enlisted the help of doujin artists Shuji Sogabe and Mizuki Takayama to handle the character illustrations while Koichi Mugitani handles the mecha design, ZUNTATA alumni Yasuhisha Wanatabe to compose the game's music, and a cast of various voice actors to help bring this title into inception.

The story setting of Senko no Ronde and character art-style is heavily influenced by Keiko Takemiya's space opera manga series, Toward the Terra. The game is set in the future in which human beings fled Earth following a great disaster, and after 1,500 years are only now returning to the planet. Much of the story takes place in colonies set up across the solar system. While the Aria Federation acts as a system-wide government, much of the police activity and military work is actually handled by private security organizations run by large corporations such as Goddiver. Many character backgrounds harken to an incident in the past known as the Embassy Occupation Incident, where terrorists took several hundred people hostage, then self-destructed, killing dignitaries, ambassadors, and civilians.

The game pits players in a circular field where they pilot mechas called "Rounders", each with their own variety of bullets, missiles, and laser weaponry. The game is best known for incorporating shoot 'em up gameplay elements into a fighting game, particularly each Rounder possesses a super-powered Shell called B.O.S.S., which when combined, turns the player's Rounder into a large-scale shoot 'em up-esque end-boss with many intricate bullet patterns. Each characters' Rounders also uses two different cartridges, one emphasizing on power and the other for speed, with varying bullet patterns between the two. Aside from it's shoot 'em up style of gameplay, it has been often considered as "a 2D version of Virtual-ON" due to sharing many general gameplay concepts and mechanics.

The game first debuted on arcades in Japan on Sega's NAOMI hardware on April 26th, 2005, and over the years, saw a few revisions on arcades (namely to address some flaws found in the initial version of the game) and a console port on the Xbox 360 in 2006, which unfortunately stayed in Japan and the region-lock on the console version didn't help. Thankfully UbiSoft published the game to North America and Europe in 2007, allowing those outside of Japan to play it. The game's localization is rather scathing for some since it suffers from a case of American Kirby Is Hardcore by slapping on "WarTech" as the game's title just to make it pronounceable for those who can't pronounce "Senko no Ronde" to save their lives. Not only that, but the cover-art for the North American and European release only gives the impression that the game is all about cold-hearted machines duking it out for the player's amusement rather than its space opera storyline.

The game later received a sequel in 2009 with Senko no Ronde: Dis-United Order (or Senko no Ronde: DUO for short), which also got ported to the Xbox 360 a year later with an extended character selection and an expansion of the story. Unfortunately it was only released in Japan and it's also region-locked. It was also later released in arcades in Japan on the NESCiAxLive arcade service. Unlike its predecessor, Dis-United Order is a 2-on-2 fighting game where players also bring a secondary character to perform support attacks.

A follow-up title was announced in 2012 for the Play Station Vita that would be very different from its predecessors and possibly a different game altogether, but nothing has been heard about this title since. An updated Continuity Reboot of Dis-United Order, titled Senko no Ronde 2, was announced in late April 2017 and was released in late Summer 2017 on PlayStation 4 and PC through Steam. A trailer can be viewed here

. A pair of crossover character DLCs was announced during Tokyo Game Show 2017, one being the fan-favorite Temjin from Sega's Virtual-ON series (particularly its Operation Moongate variant) and the titular Assault Suit from NCS's Assault Suits Valken (otherwise known as Cybernator overseas).