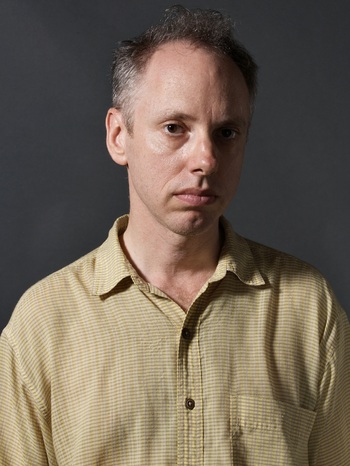 Looks happy, doesn't he?
"So far, at least, I haven't found a way to tell my kind of stories without making them both sad and funny."
Advertisement:

Todd Solondz (born October 15, 1959 in Newark, New Jersey) is a director of independent films who got his big break with the release of Welcome to the Dollhouse. He has since gone on to direct films such as Happiness (1998), Storytelling, Palindromes, Dark Horse, and most recently, Wiener-Dog.

And his films are dark. He's made a name for himself as one of the most controversial and nihilistic cinematic minds working today, with his movies painting a bleakly misanthropic and brutal portrait of human existence, particularly in the New Jersey suburbs. They're loaded with Nightmare Fuel and Squick, so by no means are they for the squeamish. You have been warned.

He can be compared to the likes of Bret Easton Ellis and Larry Clark, whose works deal with very similar themes about the dark side of humanity and self destructive behavior.

Tropes found in himself and his work: