Film / Welcome to the Dollhouse 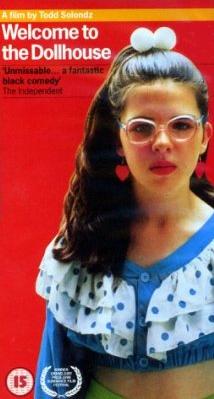 Welcome to the Dollhouse is a 1995 film by Todd Solondz. It stars Heather Matarazzo in her breakout role, as well as being Solondz's breakout movie as a director.

Dawn Wiener (Heather Matarazzo) is an unpopular, unattractive seventh grader whose family treats her as just as much of an outcast. She has great difficulty making friends and is almost always the target of cruel and isolating behavior from her peers. At home, she is the least favorite of the three Wiener children, a fact that is often exploited by her younger tutu-wearing sister Missy (the apple of their parents' eye) in order to get her in trouble. Dawn goes through life in a quiet and awkward state of mind.

One day, Dawn's older brother Mark brings over a high school senior named Steve Rodgers to tutor him in exchange for Steve playing in Mark's band. Upon meeting, Dawn becomes infatuated with the older boy and develops a crush on him. Things get even more complicated for her as one of her classmates Brandon antagonizes her more and more, mostly because he has feelings for her.

While Palindromes is considered a nominal sequel, Wiener-Dog was released in 2016.

Not to be confused with the TV series Dollhouse.