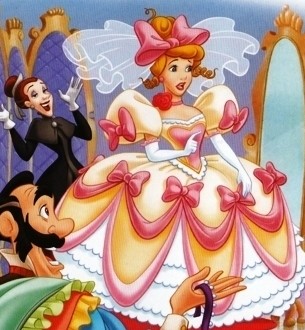 "But the guests will mistake me for a present!" she cried.
Lucina's mothernote May be a female Robin, Sumia, Sully, Maribelle, or Olivia: Now let me get a look at this gorgeous... Er... dress? Oh dear. I've never seen so many... unusual colors and shapes in one piece of clothing.
Lucina: I know! It's very modern. See all the giant pink polka dots? If you look carefully, you'll see that each one is a portrait of Emmeryn herself! I wager when Father sees you in this, he'll just scream with delight!
Mother: (I bet he'll scream, all right...)
— Fire Emblem Awakening
Advertisement:

When it's clear In-Universe that the clothing tried to be fancy but ended up a mess.

Some people like fancy, detailed clothing, but it's not always easy to make such clothes look good. It could be that the character/dressmaker/culture has no taste (and also why some people rightly prefer Simple, yet Opulent clothing). Or that the outfit was really rushed and this is the unfortunate result. Or the writer/designer is making a point about fashion trends. This last may involve caricatures of Real Life outfits.

Often occurs with bridesmaids' dresses in sitcoms. They're ugly, but the bride thinks they're beautiful - or the bride knows that they're ugly, and picks them so that she looks better by comparison.

Again this is not when the viewer thinks an outfit is bad. That's WTH, Costuming Department?. This trope is when the writer/designer deliberately states that a costume is bad, either in direct narrative voice or via the reactions of the characters in the story.

This often overlaps with (again has to be an in-universe overlap):

A Super-Trope to Tacky Tuxedo, Homemade Sweater from Hell.

Well, just look at him. His outfit is a giant voodoo top hat, a bright pink fur coat, pink boots with heels and a diaper with a star on it. Juliet calls him a pervert almost immediately upon meeting him.

Well, just look at him. His outfit is a giant voodoo top hat, a bright pink fur coat, pink boots with heels and a diaper with a star on it. Juliet calls him a pervert almost immediately upon meeting him.