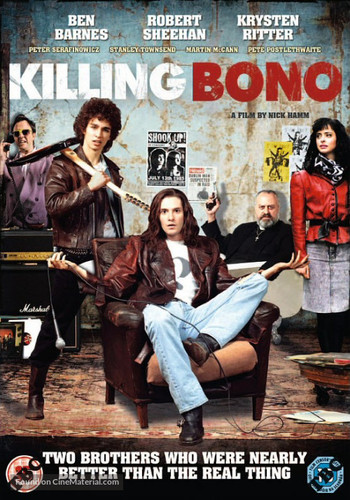 Some men are born great, some achieve greatness, and some have the misfortune to go to school with Bono...
— Neil McCormick

Killing Bono is a 2011 Irish comedy movie based on the memoirs of music journalist Neil McCormick. It follows the story of Neil and his brother Ivan in their quest to become rich and famous rockstars, only to find themselves dramatically overshadowed by their former school-friend Paul Hewson (better known to the world as Bono) and his band U2.

To make matters worse, back in their school days Ivan auditioned for a place in U2 and (unbeknownst to him) the band decided they wanted him to join, but a disgruntled Neil made an executive decision and refused the offer on his brother's behalf. After witnessing Bono's meteoric rise to fame, Neil feels he owes it to his brother to make their band Shook Up! even more successful than U2. Only, things don't quite go according to plan...

Starring Ben Barnes (of Chronicles Of Narnia fame) as Neil, Misfits star Robert Sheehan as Ivan, and Martin McCann (Clash Of The Titans) as Bono. Also features Krysten Ritter, Peter Serafinowicz, and the late Pete Postlethwaite (in his final performance).