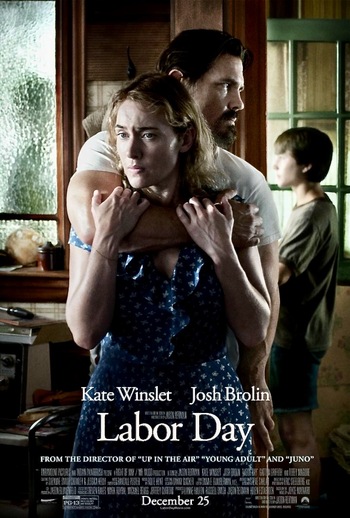 Labor Day is a 2013 American drama film based on the 2009 novel by Joyce Maynard, directed by Jason Reitman and starring Kate Winslet and Josh Brolin.

Over Labor Day weekend in 1987, depressed, single mother Adele Wheeler (Winslet) and her teenage son Henry head to a local store, where Henry encounters Frank Chambers (Brolin), a wounded, fearsome man covered in blood who asks him for a ride. Adele, initially apprehensive, feels compelled to save her son and reluctantly agrees to take him back to their house. They discover that Frank is a criminal on the run, who promises to leave, staging that he kidnapped them. He cooks them dinner, then stays for the night.

The following day, Frank helps out around the house, teaching Henry how to throw a baseball. After he teaches them to bake a peach pie, Adele and Henry become intoxicated by him and urge him to stay.

Henry meets a girl, who plants in his mind that Adele and Frank will leave him. After Adele assures him that they'll be together, and the three of them toy with the idea of being a family, the police chase heats up.