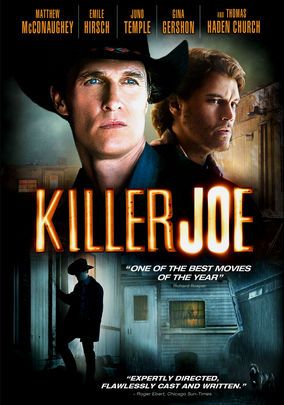 Killer Joe is a 2011 Southern Gothic Black Comedy directed by William Friedkin, based on the play of the same name by Tracy Letts. One of the rare movies to be released to theaters with an NC-17 rating. note  For those who don't know, the NC-17 rating has long been associated with borderline pornography and arthouse flicks that contain a lot of explicit sex and nudity. The last movie that tried to show that NC-17 was a commercially viable rating was Showgirls. It failed. Only about 90 or so films carry the rating to this day, as opposed to the thousands upon thousands of R rated films

Chris Smith (Emile Hirsch) is a young drug dealer in Dallas County who owes money to a loan shark. He can't pay it back himself as he doesn't have the cash, and his father isn't going to bail him out again. He hatches a scheme upon hearing from his stepfather that his mother has a $50,000 life insurance policy on her with his sister listed as the beneficiary. He convinces his father to plan to have her killed, and collect the policy to be split amongst them and his current wife Sharla (Gina Gershon), which will give him the money he needs. But rather than do it himself and risk messing it up he decides to go ahead and hire Joe Cooper (Matthew McConaughey, in what was widely seen as a Career Resurrection role), a Dallas PD detective who works as a contract killer on the side.

The problem is, Joe requires his $25,000 fee up front, and the family can't afford to pay him. He's about to call the deal off...until he sees the daughter Dottie (Juno Temple), and makes an exception on the ground that she serve as a "retainer" to take in case they aren't able to pay him. The family ends up agreeing to the deal and even tricks Dottie into having a one night affair with Joe to seal the deal. What Could Possibly Go Wrong? Well it turns out, a lot.