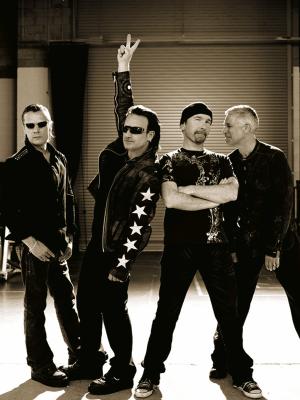 "These guys are from England and who gives a shit?" note From left to right: Larry Mullen Jr., Bono, The Edge and Adam Clayton (who actually was born in England).
"Ooh, I've got no shame, oh no, oh no..."
—"Window in the Skies"
Advertisement:

U2 are a rock band from Dublin, Ireland. The band consists of Paul "Bono" Hewson on lead vocals, David Evans aka The Edge on guitar, Adam Clayton on bass and Laurence Joseph "Larry" Mullen, Jr. on drums. The band formed in 1976 under the name "Feedback" when the members were teenagers with limited musical proficiency. It soon changed its name to "The Hype." In 1978, when David's older brother Dik left the band, they decided to change their name again; Mullen's friend Steve Averill of The Radiators from Space gave them six suggestions of names, and they settled on "U2" because it was the name they least disliked.

By the mid-1980s, the band had become a top international act, noted for their anthemic sound, Bono's impassioned vocals, and The Edge's textural guitar playing. U2 started as one of the early pioneers of Post-Punk and their albums Boy and War were largely college radio hits. Their success as a live act was greater than their success at selling records until their 1987 album The Joshua Tree increased the band's stature "from heroes to superstars," according to Rolling Stone. U2 responded to the dance and alternative rock revolutions, the backlash against their earnest image and their own sense of musical stagnation by reinventing themselves with their 1991 album Achtung Baby and the accompanying Zoo TV Tour. They carried on with their experimental, heavily electronic and satirical Alternative Rock sound for the rest of the 1990s. Starting in the 2000s, U2 pursued a more traditional sound that retained the influence of their previous musical explorations before combining that with the experimental spirit of the '90s on one of their most recent albums, No Line On The Horizon.

U2 have sold more than 140 million albums worldwide and have won 22 Grammy Awards, more than any other band. In 2005, the band were inducted into the Rock and Roll Hall of Fame in their first year of eligibility. Rolling Stone magazine listed U2 at #22 in its list of the 100 greatest artists of all time. Throughout their career, as a band and as individuals, they have campaigned for human rights and social justice causes, including Amnesty International, the ONE Campaign, Music Rising and Bono's DATA (Debt, AIDS, Trade in Africa) campaign.

Looking beyond the current discography, Bono said at the surprise launch for Songs of Innocence that U2 have made a few albums since 2009, and this is just the first one to be released, and a few hours later announced that their next album Songs of Experience should be out soon. It came out in 2017. Oh, and Bono and Edge worked on the soundtrack to Spider-Man: Turn Off the Dark. Suffice it to say, for a band that's been going for over forty years, they don't show any signs of slowing down soon.

Extended Plays and Other Releases:

I can't trope with or without you: