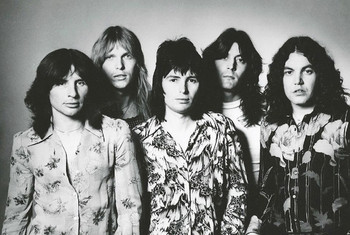 UFO is an English Hard Rock band that was formed in London in 1968. The group was founded by lead vocalist Phil Mogg, guitarist Mick Bolton, bassist Pete Way, and drummer Andy Parker. After releasing two unsuccessful Psychedelic Rock albums, Bolton was sacked and the band recruited Michael Schenker, who had recently left Scorpions, in 1974. With this line-up, later joined by keyboardist and rhythm guitarist Paul Raymond, the band recorded their most successful material. In 1979, however, just after the recording of their iconic live album Strangers in the Night, Schenker left the band.

The band currently consists of Mogg, Parker, keyboardist Neil Carter, guitarist Vinnie Moore, and bassist Rob De Luca. Raymond died in 2019, just days after performing his last show with the band. Founding bassist Pete Way died in 2020 from injuries sustained in an accident. UFO are a highly influential band, being a heavy influence on the New Wave of British Heavy Metal and Hard Rock all around the world.

"Only You Can Trope Me":