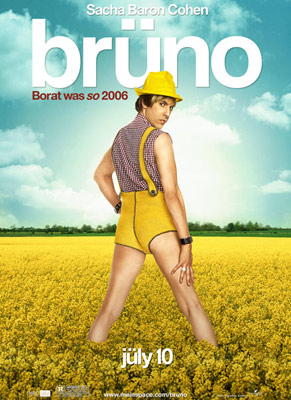 Brüno is a 2009 mockumentary film from Sacha Baron Cohen, and the third based upon one of his characters from Da Ali G Show (after Ali G Indahouse and Borat). Brüno, a fabulously gay Austrian fashion reporter and TV host, is fired from his show Funkyzeit after ruining a fashion show. To add insult to injury, his lover leaves him for another man. He decides to go to America (with his assistant Lutz) to become the "biggest Austrian superstar since Hitler".

Not to be confused with that other Bruno we don't talk about.