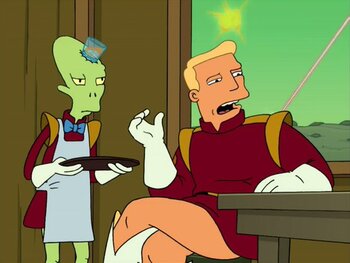 "Damn it Kif, where's the little umbrella? [...] Make me a new one."
Archer: Woodhouse, what're you doing?
Woodhouse: Uh, sitting down sir.
Archer: What, at the table? Like people?!
Mallory: Sterling!
Archer: What? He thinks he's people!
— Archer
Advertisement:

For every bumbling investigator, overly idealistic hero, delusional superior or short-sighted "mastermind," there's an assistant, that one guy who has to do all (or most) of the work, deal with the consequences of his boss' antics, and generally play clean up. As a result of having to deal with his boss' foolishness, this character is continually exasperated, and would probably rather be anywhere else. On the bright side they singlehandedly keep their side relevant.

Expect this kind of character to be a Servile Snarker and/or a master of the Face Palm. Related to the Sassy Secretary. Not the same as a Hypercompetent Sidekick, who, despite the fact that they work their butt off for little pay and no credit, is generally fine with the way things are. The Beleaguered Assistant is not, and would probably have called it quits a long time ago, but stays around either out of a sense of duty, having been assigned to his post by the military or another authority, or because they owe their boss, or someone else, a fairly big favor, or simply out of fear for the repercussions (being labeled a deserter or being jobless). If he's ever granted free time, expect him to be pulled from his day off.

Some Beleaguered Assistants treat their boss with contempt and rudeness, yet the boss simply ignores them because they are either too stupid to notice or don't care. Alternately, they act as if they are delighted to help, and hate themselves for it.

Note that the more incompetent or clueless the boss is, the more likely this type of character will show up, though less incompetent (and more hyperactive) characters can have these as well.

Often the Only Sane Man and The Reliable One. Only Sane Employee is when this character has far more to deal with than just his incompetent boss, while Beleaguered Boss is in charge of a bunch of idiots/lunatics/mavericks. A good character to use when determining whether other characters are Nice to the Waiter. See also Conservation of Competence and Success Symbiosis. Contrast Professional Butt-Kisser. If they are male and their employer is female they may be half of Mistress and Servant Boy relationship.

Example of:
Rule of Cool