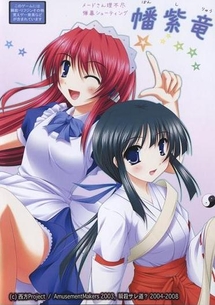 This tale is set on Earth, far in the future...
Advertisement:

Seihou Project (西方, where "Seihou" means West or Western) is a series of Doujinshi Bullet Hell Shoot 'Em Up games, developed by Amusement Makers. Known primarily as the sister series to the massively popular Touhou Project, the Seihou Project puts an emphasis on memorization and reflexes by focusing on less numerous but faster bullets compared to its sibling series. Notably, ZUN, the creator of Touhou Project, was involved in the creation of the first two Seihou games as a member of Amusement Makers, as its BGM composer.

In a distant future, Earth has fallen into near ruin after its natural resources are depleted, leading to the destruction of the environment and the extinction of nearly all vegetation on the planet. Driven to the brink of destruction, humanity finds its sole hope in the only surviving genus of plants left on Earth: the cactus. Erich, the chairman and founder of Cactus Company, heads the research to extract energy from cacti, discovering a miracle energy thus named Saboten Energy. However, while possessing power beyond even atomic energy, Saboten also proves to be extremely difficult and dangerous to control, causing large-scale accidents and nearly pushing Cactus Company to the verge of annihilation. Decades later, the Cactus Company manages to perfect the use of Saboten Energy, using it to slowly restore the environment, allowing humanity to bounce back.

The Seihou games chronicle the adventures of VIVIT, a maid-type combat android powered by Saboten energy, as she goes on errands given to her by her master Erich. She is later joined by Hirano Sakurasaki, a Miko who serves as the secondary playable heroine in Banshiryuu.

There are currently three games in the Seihou series as well as some extras released to celebrate the series:

Although not officially connected, Samidare is regarded as a Spiritual Successor to the Seihou series.

"So, my fake self... Let's do something... wonderful."
—Marie, Kioh Gyoku (when winning against herself)
"Yes, yes, Marie. She's such a sadistic person indeed. Since then, she asked me out on a date 4 times..."
— VIVIT,Shuusou Gyoku Ending