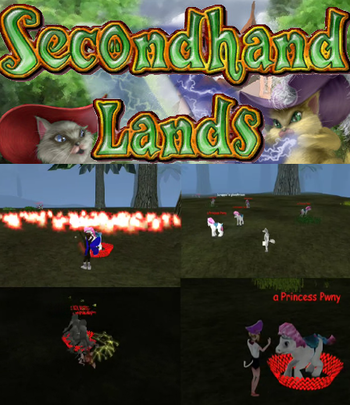 Secondhand Lands was a downloadable

fairy tale MMORPG, designed by indie developer Bobby Thurman with a closed beta launch for PC and Mac of April 1st, 2008. The initial full release was in 2009. It was taken offline in 2021 and is no longer playable.
Advertisement:

It was am unique game that satirized many fairy tales and nursery rhymes, including Little Red Riding Hood, Three Little Kittens, Mother Goose, Little Bo Peep, Goldilocks and the Three Bears, as well as countless other and original material as well. In the game, you were able to play as a Wolf, Sheep, Scrapper (Anthropomorphic Animals), or a Catgirl, and you were able to choose whether to join the Little Red Riding Hood or Little Bo Peep alliance, regardless of race. The game followed a storyline determined by the route you chose, beginning in an adorable village populated by cats to an ironically named "Peaceful Glade", in which your character encountered dreadful monsters. The game was shut down briefly in March 2012 and was reopened later before finally being shut down again in 2021.