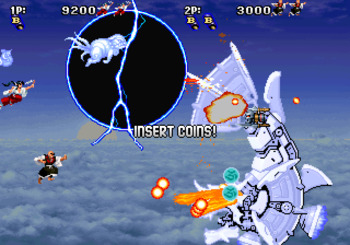 A Miko and a Bare-Fisted Monk against... a Humongous Mecha!?
Sengoku Ace is a game series of Shoot 'Em Up made by Psikyo in The '90s and is one of their most well-known franchises, along with other shooter games like Gunbird and Strikers 1945. The series is set in a Japanese Spirit Steampunk world ruled by magic in which the chosen ones have to rescue the princess from the hands of the Big Bad who needs her to rule the world.
Advertisement:

The series consists of 3 games, the first two made between 1993 and 1996, and a third title released in 2005 that was also one of the last games made by Psikyo (or specifically by X-nauts, a Korean company that bought Psikyo in 2002.) Out of the various characters in the series, the most remarkable of them would be the Shrine Maiden Koyori, known as the Series Mascot of not just Sengoku Ace, but Psikyo itself, even when she's not The Hero in any of the games in the series.

Although The Other Wiki have two modest articles about Ace