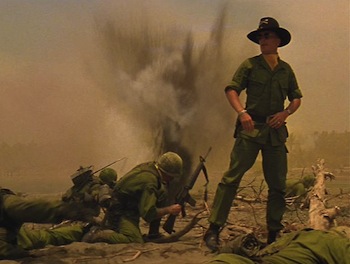 "You call it hell, I call it home."
"Smell that? You smell that? Napalm, son. Nothing else in the world smells like that. I love the smell of napalm in the morning. You know, one time we had a hill bombed, for 12 hours. When it was all over, I walked up. We didn't find one of 'em, not one stinkin' dink body. The smell, you know that gasoline smell, the whole hill. Smelled like... victory."
— Lietuenant Colonel Kilgore, Apocalypse Now
Advertisement:

In most if not all war movies, there's an officer who seems to actually enjoy the war. He runs into battle with a smile on his face and seems sad that the war has to end someday.

Named after Lieutenant Colonel Kilgore in Apocalypse Now, though you'd be forgiven for thinking it's a pun on "Kill-Gore" we made.

This trope is the intersection of Blood Knight with Colonel Badass. Not necessarily The Neidermeyer (who is hated by his subordinates), and usually not a General Ripper (who's paranoid and crazy), nor a Sociopathic Soldier (who doesn't necessarily enjoy war, but does love killing folks). Not necessarily mean to the troops or totally obsessed, just someone who enjoys the war a bit too much. They also tend to be very good at combat and more often than not may be on the thick of the carnage himself. Any commanding officer from a Proud Warrior Race will automatically be this trope; just expect the words "honor in battle" to be thrown around a lot more. See also It Amused Me and Blood Knight.

Mayfeld and Din sit down with Colonel Hess as Mayfeld asks what Hess thinks about Operation: Cinder and about the soldiers and civilians he had sent into the grinder.

Mayfeld and Din sit down with Colonel Hess as Mayfeld asks what Hess thinks about Operation: Cinder and about the soldiers and civilians he had sent into the grinder.