Awesomesauce! Do you want to be a school idol? 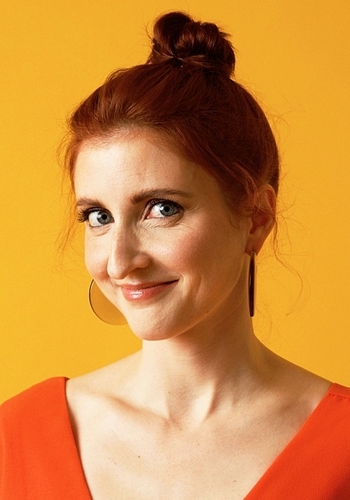 Marieve Herington (born February 22, 1988 in Oakville, Ontario) is a Canadian-American actress, voice actress, and singer. She is sometimes credited as Lindsay Torrance.

Marieve Herington started her career at the age of 9 with appearances in Ontario commercials for Canadian Tire and KFC. She mostly did various Canadian animated shows produced in Toronto early in her career, with lead roles in Decode Entertainment's 2005 series Delilah & Julius and Nelvana's 2009 show Pearlie, but also made a few minor appearances in live-action Canadian shows. She really started to break out in the 2010s, as like fellow formerly Toronto-based VAs Tara Strong, Cree Summer, and Katie Crown, she started to shed off the Only So Many Canadian Actors niche. While she made appearances in anime dubs and video games, as well as a few minor roles in American animated movies and some more live-action shows, her Star-Making Roles ultimately proved to in the English dub of the 2016 Japanese series Love Live! and Disney Television Animation's 2018 series Big City Greens.

Marieve Herington also has a significant career in music, having been singing on stage since she was 12. She has fronted several Jazz ensembles, and currently leads her own band called The Marieve Herington Band. She's even released a few albums! She also performed the theme songs for CBC's Sesame Park (a Canadian adaptation of Sesame Street), Nelvana's 1997 Animated Adaptation of Pippi Longstocking, and TVOntario's Marigold's Mathemagics.