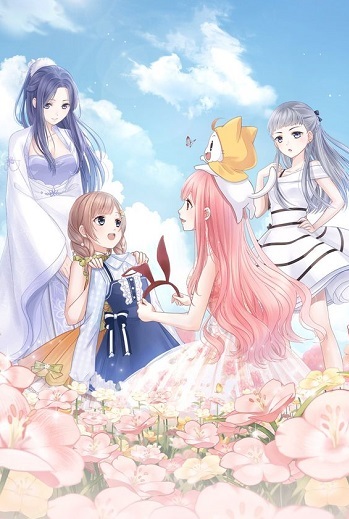 Which cute outfit should you wear today? How about... all of them! Featuring Lunar, Bobo, Nikki, Momo, and Kimi.
Love Nikki - Dress Up Queen is a mobile dress-up game with RPG Elements developed by Paper Games (formerly SuZhou Nikki Co.) and published in the West by Elex Technologies. It is the global English language version of the Chinese app "Miracle Nikki", which launched in 2015. ("360Mobi Nikki", the version targeted at Southeast Asia, also contained an English language option during its operation.)
Advertisement:

As the story begins, an average teen girl named Nikki and her talking cat Momo find themselves magically transported to a world called Miraland, where all conflicts are resolved on the catwalk. Even conflicts of international importance: years ago, following the death of the beloved King Sayet, his three most treasured designs were distributed to the winners of an intense fashion contest called the "Nine Day War." One of the winners was Queen Elle of Pigeon Kingdom: she took home two of the three treasures, and has been using their power to rule as a tyrant ever since. (The third treasure disappeared with Elle's rival, a mysterious pink-haired contestant named "Hostess L", and neither has been seen since...)

Nikki (herself an amateur stylist) can't go more than a few paces without someone challenging her to a battle of the ballgowns - or a sportswear skirmish, or a denim dispute, or any other sort of clothing contest. Her natural talents quickly endear her to Bobo, a student from the Lilith Kingdom, and Lunar, a designer from the Cloud Empire. It also earns her the attention of Kimi and Mr. Joe, two stylists working for the Apple Federation Apparel Group.

With the help of her new friends, Nikki will embark on an amazing journey across the seven nations of this new world: the modern and fashionable Apple Federation, the magnificent eastern Cloud Empire, the cute and fairy-like Lilith Kingdom, the wild and untamed Republic of Wasteland, the cold and stern North Kingdom, the elegant but magisterial Pigeon Kingdom, and the mysteriously high-tech Ruin Island. As she travels, she'll learn the designing styles of each country, build relationships with the designers & stylists she meets along the way, and prove that she's got what it takes to be the best stylist in Miraland.

She might even save the world while she's at it!

The game has been adapted into three different comic series: one released officially in English by the Love Nikki team, one published only in Japan in the Princess magazine, and another that was published only in the Nakayoshi magazine.

A sequel to the game, Shining Nikki was released in Taiwan and Mainland China in 2019, with a global server released in July 2021.