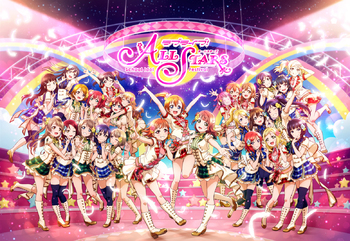 Love Live! School idol festival ALL STARS is a mobile Rhythm Game RPG in the Love Live! franchise, and is the fourth game to join the lineup after Love Live! School Idol Festival, Love Live! School idol paradise, and Puchiguru! Love Live!. School idol festival All Stars was originally developed and published by KLab in partnership with Sunrise and is currently developed by MyNet Games and published by Bushiroad. The game was released in Japan on September 26, 2019, while the Global version was released on February 25, 2020 and reached parity with the Japanese version on July 30, 2021. A Chinese version of the game released on May 28th, 2021, complete with a skyscraper light show.

Taking place in an Alternate Continuity, the story begins when the protagonist and their Childhood Friend, Ayumu Uehara, witness a joint live between μ's of Otonokizaka High and Aqours of Uranohoshi High. Inspired by the joint live, the protagonist tracks down their school's idol club to support them yet they learn from club member Kasumi Nakasu that it's on the brink of closing down. The protagonist, with help from Kasumi and Ayumu, sets forth to reform the Nijigasaki High School Idol Club by recruiting their friends (and friends of their friends), and together, their journey begins.

Like other idol-themed rhythm games, players collect scores of vibrantly-designed, extravagant cards depicting idols from across the Love Live! franchise, forming them into teams to challenge songs. Unlike other games, ALL STARS takes a decidedly more RPG-influenced approach; in addition to standard mechanics such as unique, personalized Skills for each card and a level growth mechanic, ALL STARS features a skill tree through which you can customize your idols further, as well as a unique Strategy system where you can swap between trios of characters in real time to augment gameplay.

ALL STARS contains examples of the following:

Season 2 episode 3 of the Nijigasaki anime shows some of the Just Believe collared outfits in the SIF All Stars game. Also shown is an in-game clip of those outfits.

Season 2 episode 3 of the Nijigasaki anime shows some of the Just Believe collared outfits in the SIF All Stars game. Also shown is an in-game clip of those outfits.