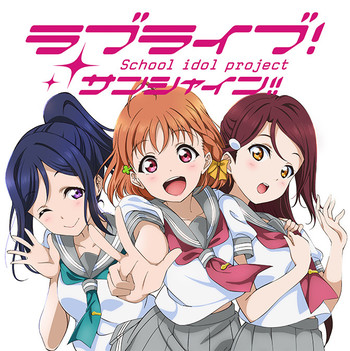 Love Live! Sunshine!! is an ongoing Schoolgirl Series manga written by Sakurako Kimino and illustrated by Masaru Oda that began serialization in Dengeki G's Magazine in May 2016. It is an installment in the Love Live! franchise following the adventures of the school idol group Aqours and a sequel to the original Love Live! manga.

The manga follows Chika Takami, an ordinary high school girl attending Uranohoshi High, a small school in Uchiura, Numazu that's on the verge of being shut down due to its declining student population. Enamored with the exploits of µ's, a legendary school idol group who won the very first Love Live school idol competition, Chika sets out to make her dream of becoming a school idol come true. Accompanied by her childhood friend Kanan Matsuura and Riko Sakurauchi, a transfer student from Otonokizaka High, the story of "Aqours" begins here.