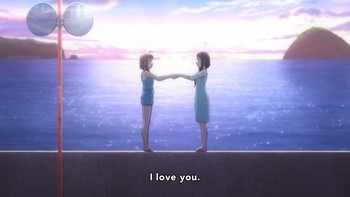 "I love You(-chan) too."
Love Live! Sunshine!! has arguably even more Les Yay than its parent series (page very much in progress), as they're teasing them directly in-series (and in real life as well) as opposed to other media.

open/close all folders
Chika x Riko
From the beginning of the series, Chika and Riko have shared plenty of Les Yay. In the first season of the anime, a heartfelt scene between them seems to happen at least Once an Episode. Especially that Riko herself is a Yuri Fan.
Chika x You
Hanamaru x Ruby
Kanan x Mari
Continuing Eli and Nozomi's legacy, Mari and Kanan have gotten a fair amount of Les Yay ever since the start of the anime.