This is the character sheet for the Sequel Series Love Live! Sunshine!!.

For characters from the original series, visit their character page here.

For characters appearing in Love Live! School idol festival ALL STARS and its anime adaptation, visit their character page here.

For characters in the spinoff, Superstar!!, visit their character page here. 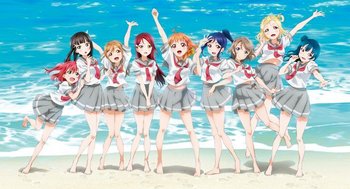 The franchise's successor group, this time hailing from Uranohoshi Girls' High School in the rural seaside neighborhood of Uchiura in Numazu. Founded on a whim by µ's fan Chika Takami, they were initially idols for the sake of being idols, but the shaky status of Uranohoshi as an institute gave the group a new purpose, being to support their school and its reputation. 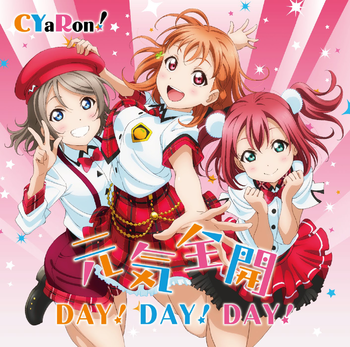 The "Smile" subunit, denoted by their bright, poppy sounding music and cheery overtones. They occasionally get slower, softer, more melancholy songs to distinguish them from the usual "happy" stereotype as a way to exemplify their range and versatility. CYaRon! consists of Chika Takami, You Watanabe, and Ruby Kurosawa. 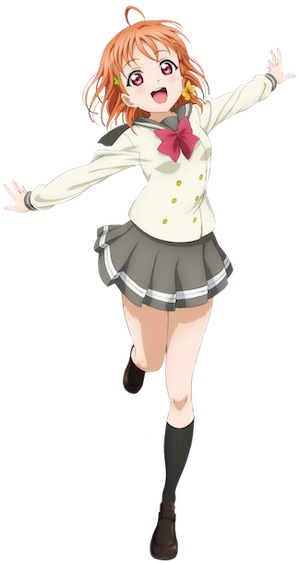 Aqours' founder and leader, who was inspired to create her own school idol group after seeing a µ's performance during a school trip. She serves as Aqours' lyricist along with Hanamaru. She lives at the Tochiman Inn, which is run by her family, and she also has a pet dog named Shiitake.

Chika's childhood friend, and one of Aqours' costume designers alongside Ruby. She's athletic, and Chika's first supporter in forming the group. She really loves all kinds of uniforms. She's also a member of the high diving club at Uranohoshi Girls High School, and is good enough to qualify for the national team.

Dia's shy younger sister, and a huge fan of idols herself. She and You work on the costumes for Aqours. She's very good at sewing. 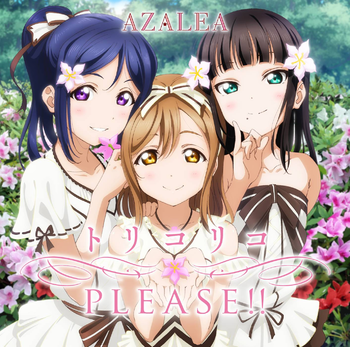 A childhood friend of Chika, and later, You. She helps run a scuba diving shop with her family, and is a scuba diver herself. She oversees Aqours' physical training and dance routines.

Uranohoshi's (usually) cool and collected Student Council President, and Ruby's older sister. She was raised in a very traditional Japanese household and comes from a well-known and respected fishing family.

Ruby's best friend, and Aqours' lyricist alongside Chika. Chika personally picks her out of a crowd to become an idol because she looks the part. She loves books and is fascinated by technology due to being raised in a temple without very many modern conveniences. She's Uranohoshi Girls' High School librarian. 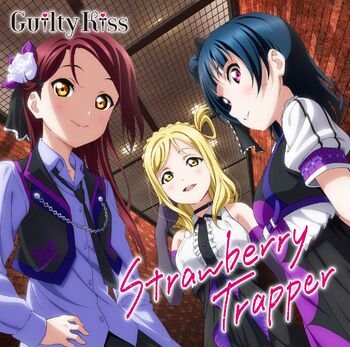 The "Cool" subunit, Guilty Kiss is notable for their distinct influences stemming from Western-oriented music styles. Their type of music tends to vary wildly as a result, including themes like Western pop, Electronic Dance Music, and hard rock. Its members are Riko Sakurauchi, Yoshiko Tsushima, and Mari Ohara, who, despite the theme of their subunit, have some... pretty interesting personalities.

A second year transfer student from Otonokizaka. Chika personally seeks her out as a key member of Aqours after learning that she has musical skills. As such, she's the composer of Aqours. She lives beside Chika's inn.

A 1st-year afflicted with chuunibyou that makes her believe she's a fallen angel named "Yohane" who has been cast out of heaven and cursed by God. In reality, she just has abysmal luck. She's also a fairly popular streamer on the internet, and thus serves as Aqours' video editor. 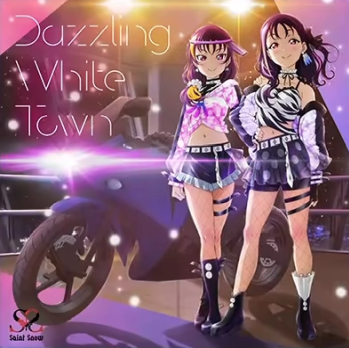 A rival idol group, composed of the sister pair of Sarah and Leah Kazuno hailing from Seisen Girls' Academy in Hakodate, Hokkaido. Saint Snow is recognized for their signature blend of hard rock/metal styles drastically contrasting Aqours, making them an extremely strong contender for Love Live. Their Serious Business attitude causes them to write off Aqours as school idol wannabes, but they later develop a Friendly Rivalry with the group after seeing their potential first-hand.

Saint Snow generally performs as an "extra unit" to Aqours, being prominently featured in multiple live concerts alongside the main unit as well as having their own calls and responses and content. Saint Snow also performs select songs with Aqours (thus forming an 11-member unit), credited as "Saint Aqours Snow". 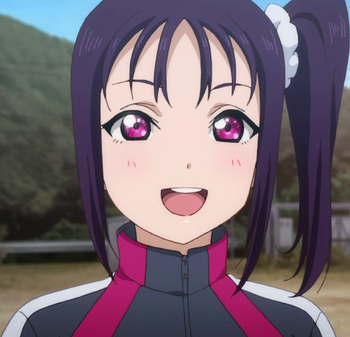 The elder sister of the Saint Snow duo, and the primary vocalist. Cool, calm, and collected, she initially meets Aqours with a cold front but gradually opens up to them once she sees their potential. As a 3rd year, this is her final shot at taking home the Love Live trophy once and for all. 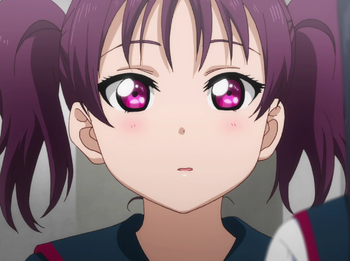 The younger sister of Saint Snow, who primarily does the rapping. Leah is known for being fiercely competitive to a fault, and outside of competition is a woman of few words. With Saint Snow's final Love Live hanging in the balance, Leah tries to pull out all the stops to win their final competition together. 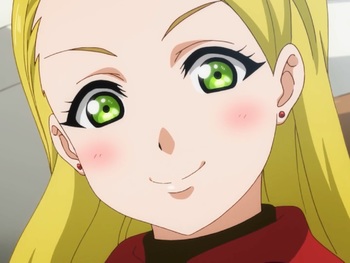 Mari Ohara's mother, who is responsible for Mari's half-Japanese ancestry. Appearing briefly in the main series during a flashback, Mari's mother makes her debut in The Movie as a principal character who recruits the remaining members of Aqours to find Mari, Kanan, and Dia, who have mysteriously disappeared while on their graduation trip in Italy. 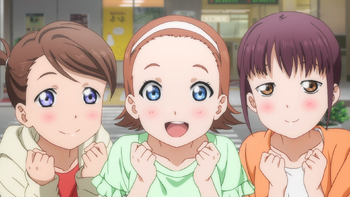 Three of Chika's friends and classmates who support her endeavours at idolhood.
Shiitake 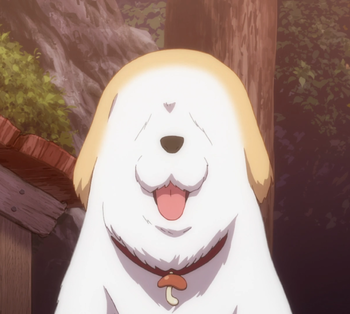 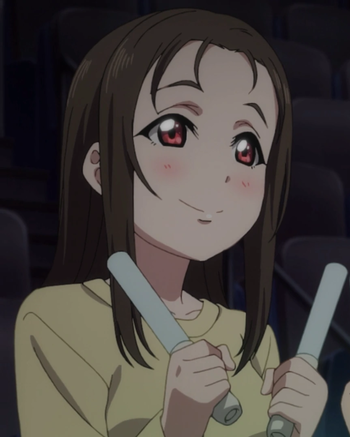 Chika's older sister, and the eldest child of the Takami family. She helps her mother run the family's Ryokan Inn. 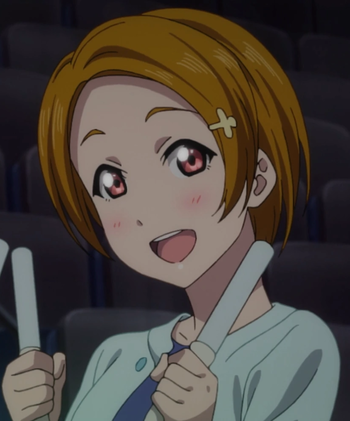 Chika's other older sister, and the middle child of the Takami family. 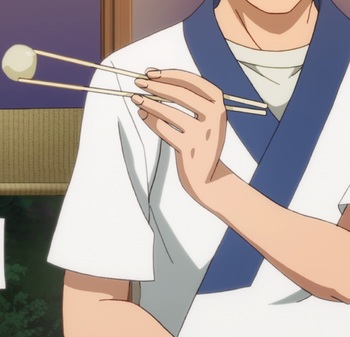 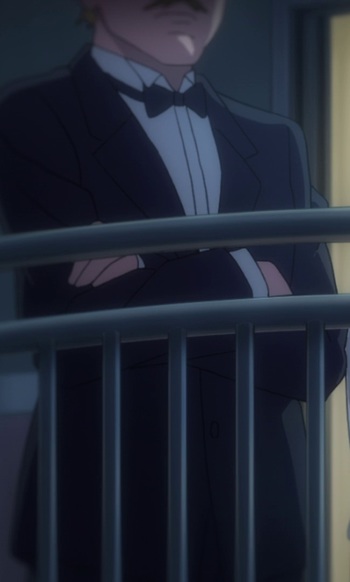 The Ohara family's father, who is an Italian-American.
Riko's Mother 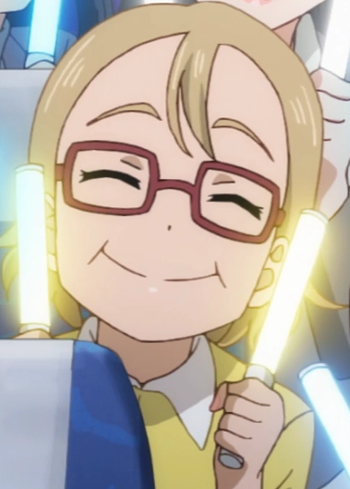 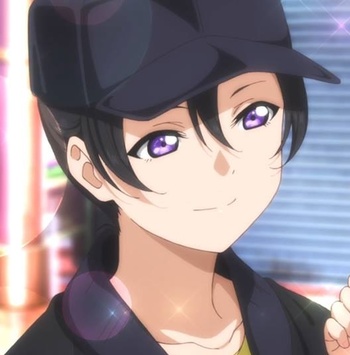 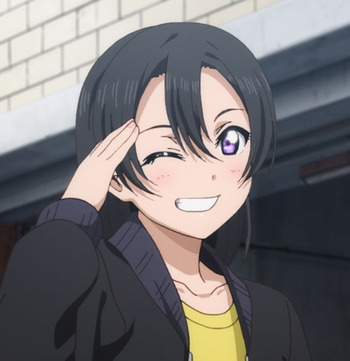 You Watanabe's cousin, who grew up in Italy. She appears in the movie.