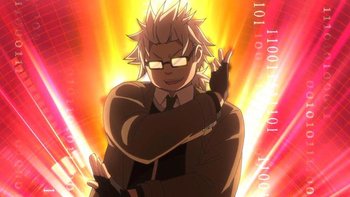 It's all in his head.
"Gotta express that middle-school arrogance and being emo."
— Translated character design notes for Gladion, Pokémon Sun and Moon
Advertisement:

Chuunibyou (中二病 / 厨二病), often shortened to chuuni or chuu2, is an often-derisive Japanese slang term for the embarrassing behavior of 13-to-14-year-olds. The term literally means "Middle [School] 2[nd Year] Syndrome" (often translated as "Eighth-Grader Syndrome" in US media). Despite the name, it can manifest in people of all ages.

As a colloquial term, the exact "symptoms" of chuunibyou aren't entirely set in stone, but in general, chuunis act like overly melodramatic know-nothing know-it-alls who think of themselves as more awesome than everyone else because of experiences, abilities, and even special powers that they clearly don't have. Imagine kids trying to convince you (in the most obnoxious way possible) that they're accomplished Ninjas who could kick your ass, and you kind of have the idea.

The term was coined by Japanese radio personality Hikaru Ijuin

on his program in 1999. He originally used it much more broadly, to refer to any kind of childish thinking or behavior exhibited by kids that age (and would occasionally admit to "contracting" chuunibyou himself). The Japanese Internet took the concept and ran with it, applying it specifically to the kind of people they often encountered (and in the process causing Ijuin to lament that "I have no interest in this word anymore because it has lost its original meaning from when I first described it

The Trope Codifier, on the other hand, is Hyouya Saegami's Chuunibyou User Manual

While chuunibyou is by no means limited to Japan, in the grand tradition of Japanese Media Tropes, Japan is the first country to give the phenomenon a name (partly by having a particularly weird twist to it). English speakers might talk about a "phase", but thanks to the Internet, the Japanese term has started to catch on in English, and some translations of Japanese works (such as Love, Chunibyo & Other Delusions) will leave the term untranslated. Interestingly, the Japanese themselves see the Ur-Example as seminal Spanish literary figure Don Quixote, who became quite popular in Japan at least in part because they were familiar with his particular brand of delusion.

Keep in mind though that if the characters act like this but they really are the things they're acting out (like someone with actual super powers going over the top with their behavior) it's automatically a Downplayed Trope which may even go into Ascended Fanboy territory as it's obviously not pretend if they can do those things for real.

Sub-Trope of Immaturity Tropes and Stock Japanese Characters. Not to be confused with the English phrase Sophomore Slump, which has a very different connotation. For students of this age who really do have exciting lives, see Second Year Protagonist.