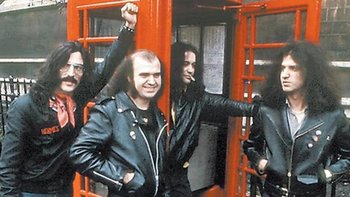 Barón Rojo (literally Red Baron) is a Spanish Heavy Metal band born in The '80s that was the Trope Maker and Trope Codifier for Heavy Metal in Spain as well one of the precursors of the Spanish Rock scene in general that continues until today. The group was formed with the brothers Armando and Carlos del Castro in voice and guitars, José Luis Campuzano "Sherpa" in bass guitar and Hermes Calabria in drums.

Born in 1980, Barón Rojo became a major sensation in this decade, appearing in TV shows and getting tours for all over Europe, but starting The '90s the band got their first breakup when "Sherpa" and Calabria left the band for differences with the brothers and the fatigue for the concerts. Since then, the band has a big rechange of members during the years, always with de Castro brothers at the front. They had a reunion in 2010, but it lasted a couple of years until "Sherpa" and Calabria left the band again, and this time for real. In 2019, Barón Rojo announced their end in 2020 during the 40th Anniversary with a World Tour and a final big concert in Madrid in December.

See also Mägo de Oz, another famous Spanish Metal band born in The '80s and as influential as Barón Rojo.

Si he de elegir entre ellos y el Rock, elegiré mi perdiciónnote If I've to choose between them and the Rock, I'll choose my doom