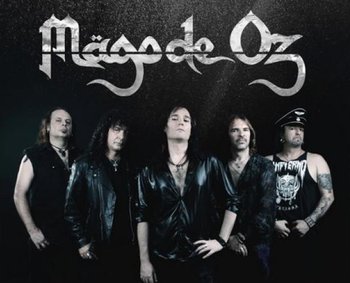 Tell me, is there a price to your soul? / Tell me, is it money or love? note From left to right: Carlitos, Frank, Zeta, Mohamed, Txus.
Mägo de Oz is a Spanish Folk Metal band formed in 1988. It used to be known for the strong Celtic feel to their music, strengthened through their consistent usage of a violinist and flautist, but they have proved to be quite an eclectic band with a wide array of influences. The name for the band was chosen, according to founding member Txus, because "life is a yellow brick road, on which we walk in the company of others searching for our dreams." But don't be afraid, because their music is often much (and we say much) less cheesy.
Advertisement:

They are known for their anti-Christianity, love for Satanist and pagan lore, political irreverence, and penchant for self-parody. Most of their albums are of the Rock Opera type and tell elaborate, often bizarre stories revolving the motifs mentioned above.

Once known as one of the greatest exponents of the metal scene in Spain, they are now easily one of their most divisive bands. The main reasons are their regular stylistic evolution (which has driven them away from their Folk/Celtic roots and into genres as varied as Heavy Metal, Power Metal, Gothic Metal and Industrial Metal in music and aesthetics), their explicit embracement of commerciality (generally considered a huge no-no among metal fans, even if earned) and their pandering to mainstream media (to the extent of expressing their wish to represent Spain at the Eurovision Song Contest, which was unheard of there for a Spanish band of their kind). Despite all of this, they are still a greatly successful band with an array of Gold and Diamond Discs and a solid place in the Hispanosphere.

See also Barón Rojo, another influential Spanish Metal band from The '80s and possibly one of the inspirations for this band.

Mägo de Oz and their music provide examples of: