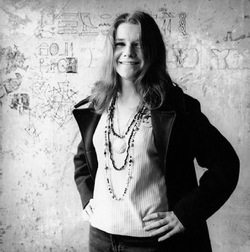 And clenching your fist for the ones like us
Who are oppressed by the figures of beauty
You fixed yourself, you said "Well, nevermind"
"We are ugly but we have the music"
— Leonard Cohen, "Chelsea Hotel No.2"
Advertisement:

Janis Lyn Joplin (January 19, 1943 – October 4, 1970) was a singer and songwriter who achieved stardom in the late 1960s as a vocalist for psychedelic rock outfit Big Brother & The Holding Company. She's famed for her raspy, blues-influenced vocal style, as well as hits like "Piece of My Heart", "Summertime" and "Me & Bobby McGee". She was also one of the performers at Monterey and the original Woodstock, along with her then backup band, the Kozmic Blues Band.

On the morning of October 4, 1970, Janis was found dead in her hotel room in Los Angeles, having succumbed to a heroin overdose, just before she could finish work on her album Pearl. She was just 27 and died only a week after Jimi Hendrix passed away at the same age, also from drug-related causes. Pearl and "Me & Bobby McGee" became posthumous successes, with the latter single going to No. 1 on the Billboard charts.

Janis was a huge fan of blues singer Bessie Smith

, the "Empress of the Blues." She identified so powerfully with her that she suspected she was Bessie's reincarnation. Bessie was buried in Philadelphia in an unmarked grave, so Janis, along with Bessie's former housekeeper Juanita Green, designed and paid for a beautiful stone inscribed "The Greatest Blues Singer in the World Will Never Stop Singing."