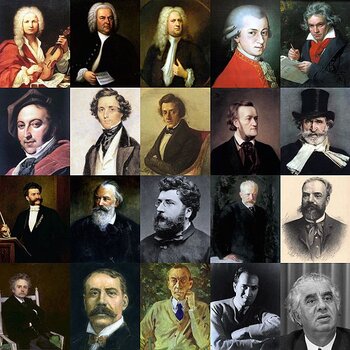 Classical music is the term generally used these days to refer to a particular tradition of music from Western European civilizations, and is often contrasted with the equally vague term Popular music. In the current era, much of this body of music has been studied carefully in scholarly manner, and is performed and appreciated as standalone art, even if it wasn't originally conceived as such.

This music has been in existence since the Medieval Era (as far back as Gregorian Chant and similar Medieval Music), and continues to the present day. Music history books on the subject are all in agreement on this time frame for the genre.

Comparing Classical and Popular Music (or Folk Music, for that matter) tends to be confusing when considering the whole spectrum of Western music history. However, to easily understand the divide, "Classical" music is generally used to refer to the tradition of music being written and played from a score, up until the invention of recording technology; "Popular music" refers to the more recent tradition of music which primarily uses recorded technology to achieve the goal of reaching wider audiences.

In contrast to current popular styles, classical music typically shares some traits and has some differences, such as:

Classical pieces are often more complex musically, especially in terms of pitch and form, than other musical styles. In modern works rhythm can be extremely complex and many strange timbres are used.

They play in such ensembles as:

One misconception is that all orchestral music is classical. Classical music most frequently uses this ensemble, but not all music written for the orchestra is classical music (for example: musicals, film scores, orchestral transcriptions of rock or pop tunes, and easy listening music). The same is true for music that uses violins and cellos.

A contributing factor to the confusion is no doubt that many orchestras perform popular music, film scores, even game scores; moreover, genre distinctions are often not particularly clear-cut. (For example, is George Gershwin classical? Jazz? Folk? Pop? Broadway? Opera? A film composer? All of the above? A lot of people just say "yes" and leave it at that.)

The size and composition of the performing ensemble is also a good means of identifying which period a piece comes from, although this is not always foolproof.

Classical music is not a single style, but is in fact a bunch of different styles, generally classified into several periods:

Unless you're making a conscious effort, ninety percent of the classical music that you actually hear will come from the Late Baroque, Classical, Romantic, and early 20th Century Periods. The Early Music (Medieval/Renaissance) and late 20th century scenes are pretty disconnected from mainstream classical music and have their own specialised performing ensembles and record labels.

One thing to remember is that Classical Music isn't 'dead'. It's alive and kicking with many great living composers and plenty of orchestras ready to perform the old standards. Recording media and the internet have made access to classical music more prevalent than ever before. If anything, classical music is more alive than it's ever been. Just for example, the person who's won the most Grammy awards is orchestral conductor Sir Georg Solti, with thirty-one wins, twenty-four of which were with the Chicago Symphony Orchestra, which has won sixty two.

In truth, Classical has never been a popular style, contrary to the myth that classical was pop of its day; it's always been the domain of the well-to-do, or highly educated; the closest it ever got to true "popularity" was in the mid-19th century, when the swelling European middle classes got into it to make themselves look more cultured and the music itself started incorporating popular themes, with especially virtuoso performers gaining fairly broad audiences (the stories about Franz Liszt being treated like a rock star aren't completely made up). Otherwise, it was only accessible to — and paid any mind by — the upper crust. That isn't the case any more. Classical Music is easily accessible for anyone who wants to hear it now. So go out and listen to it. If anyone says it's dying, or that it's too 'pretentious', just nod your head — they're the dying ones, the last of the real pretentiousness who claim pop culture killed classical, or that classical musicians are too stuffy, and hate pop culture. It didn't, it never will, and no, they don't.

They can co-exist and in amazing ways (George Gershwin, anyone? Steve Reich?). So go on, go listen to some Beethoven, it's awesome. And follow it up with The Beatles, and John Coltrane, and John Adams, too. All the classical musicians are. Don't get bogged down in fake pretentiousness that's just a myth. Just listen to the music as music, and you might be surprised you actually like it.

Examples of classical composers and pieces with their own TV Tropes pages: