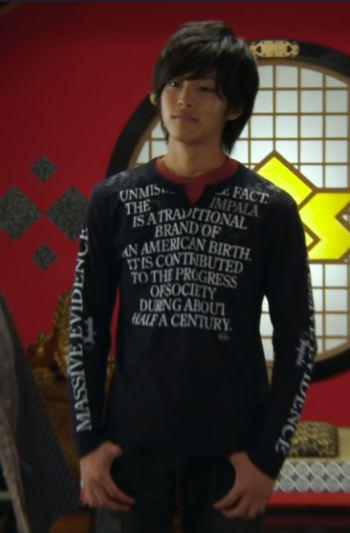 Non-English media interjecting English even when it's not always appropriate. There are a number of reasons for this. Foreign languages in general help spice up a work, and with the fact that English is something of a general trade language, many viewers will have some idea of what's going on, regardless of their native language.

However, most of the time writers don't actually speak English (or least not fluently), resulting in rather silly or nonsensical phrases. If grammatically incorrect, it can end up You No Take Candle. Ifu puronanshieishon izu za puroburemu, shii Japanese Ranguage ando rireiteddo toroupusu.Translation  If the pronounciation is the problem, see Japanese Ranguage and related tropes.

This is particularly common in Japanese and South Korean media, as English is a standard subject in Japanese and South Korean schools but very few people learn enough to become fluent. Thus, anybody in the audience will recognize random English phrases or text as being English, and might even recognize specific words, but they probably won't know enough to recognize (or care) whether the phrasing actually makes any sense.

When the English is actually pretty good, it's Surprisingly Good English. Compare Bilingual Dialogue for a more surreal linguistic experience, and "Blind Idiot" Translation for the really bad version. See also Gratuitous Foreign Language and all its subtropes. When these works are translated into English, the Gratuitous English is often changed into Gratuitous Spanish or Gratuitous French. For anime, it's usually Gratuitous Japanese.

One thing of note, Japanese and other foreign languages have a lot of English loan words in established vocabulary, such as "anime" coming from the English word "animation." note In Japan, this is called gairaigo when the borrowed word is used with its original meaning. A separate term, wasei-eigo, describes borrowings that have different meanings in Japanese than in the original language. Some of them sound like Engrish even. This can't be used as an example of Gratuitous English.

A related issue is countless English works being translated to various languages and in the process getting a Completely Different Title... still in English.

If something in a foreign language accidentally can be understood as something in English, that is In My Language, That Sounds Like....

That phrase "Let's fighting" is an example of what is, tragically, a very common Engrish construction in Japan. The bowling episode of MegaMan NT Warrior has a bunch of characters repeat the catchphrase "Let's bowling!" — making it perhaps the only one that's more painful to watch subbed than dubbed, ShoPro and all.