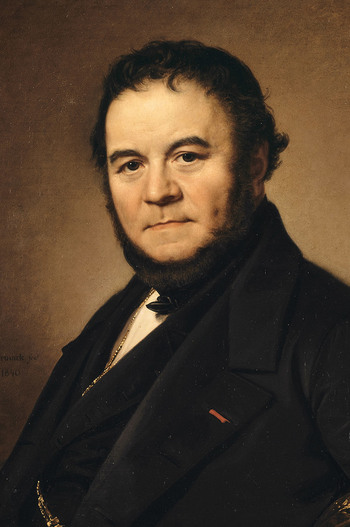 "To the happy few"
Advertisement:

Marie-Henri Beyle, better known by his pen-name Stendhal (1783-1842) was a French writer, known as one of the first practitioners of literary Realism, especially in his most famous books, The Red and the Black and The Charterhouse of Parma. His works tend to be ironic.

Although he was French, he didn’t hold his country in high regard, preferring life in Italy instead. He joined Napoleon's army primarily to get away from France and toured with Napoleon, of whom he was an unashamed supporter, all the way to Russia. He was a survivor of that disastrous campaign and still had loyalty to the Emperor during the Hundred Days. After Napoleon's defeat, Stendhal stayed in Milan for nearly a decade to get away from the disillusionment of the Bourbon Restoration. Just to make clear how enamored he was with Italy, consider the fact that he made an analogy to his concept of crystallization (the process in which one falls in love) with a trip from Bologne to Rome. Also, Stendhal Syndrome

, named after him, is based on the overwhelming feeling he had when he arrived to Florence. It’s safe to say he really liked the country.

He was also a ladies’ man and was very proud of all his conquests (some would say obsessed). Eventually this would come back to bite him when he caught syphilis, making his last years a real nightmare.

Besides his work as a novelist, he also did travel books, critical essays and biographies.