Theatre / The Rise and Fall of the City of Mahagonny 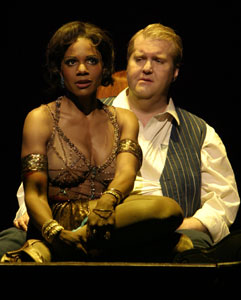 Oh mooooooon of Alabaaaamaaaaa, we nooooow must say goodbyyyeeeee...
Why, though, did we need a Mahagonny?
Because this world is a foul one
With neither charity
Nor peace nor concord,
Because there's nothing to build any trust upon.
— from the translation by W.H. Auden and Chester Kallmann
Advertisement:

A satirical, somewhat minimalist anti-Nazi opera by Bertolt Brecht and Kurt Weill (authors of The Threepenny Opera). Aufstieg und Fall der Stadt Mahagonny (The Rise and Fall of the City of Mahagonny) was first performed in 1930, though a concept version, Mahagonny-Songspiel, had been presented three years earlier.

The play tells the story of the city of Mahagonny, founded by Leocadia Begbick, Fatty the Bookkeeper and Trinity Moses, bandits running away from the law. Because gold is "easier to take from men than from rivers", Mahagonny is a place where men coming from working in the gold mines can have peace and pleasure. The first act deals with the arrival of the prostitutes (including Jenny from Oklahoma), and Jimmy Mahoney (Paul in the first drafts, Jimmy McIntyre in the Los Angeles Opera's latest performance) and his friends: men seeking the heart of a heartless world. In the second act, the characters end up having to deal with the consequences of their decadence.

The concept was meant to parody the "state of freedom" (Heilstaat) that the Nazi party was trying to create when the play was written. In the first act, the characters aim to live a life of uncomplicated luxury within the dictatorship of the three criminal founders (a parody of Hitler's plans for Germany). When this is determined to be too "inhuman" (read: dull), the characters instead decide in the second act to live a life of violence, decadence and greed, taking whatever they can take in life (a commentary on what the Nazi ideology would inevitably become). Predictably, the Nazi party was not amused, shut down the performance in 1933, and Brecht and Weill fled Germany soon after.

Mahagonny is full of Stylistic Suck, has barely any plot or characterisation to speak of, and draws out the traditional slow parts of opera as agonizingly slowly as possible - on purpose, of course. The main figures are intentionally derivative of Bertolt Brecht's earlier characters, and the sets are made out of cardboard. The lyrics are stilted, the love scenes are trashy, the conflicts have no resolution, and the ending is pointless. In short: by riling up his audience so much that they left the theatre unsatisfied with everything, Brecht hoped to get them equally angry at the rise of Nazism around them, for which the plot was a rather obvious analogy. But failing that, the play also has a whole lot of scantily clad girls.

The play was probably inspired by Pilnyak's 1929 novel Mahogany, though Brecht never cared enough about copyright to bother admitting to it.

Mahagonny is referenced throughout Lars von Trier's Manderlay. It's also one of Danny Elfman's favourite musical scores. With Mahagonny, Brecht and Weill ended up heavily influencing Stephen Sondheim's works, both in style and structure.

Rock fans may know it from the Alabama Song from The Doors' album The Doors, which is lyrically and melodically directly inspired by the work.

The Rise and Fall of the City of Mahagonny contains examples of: