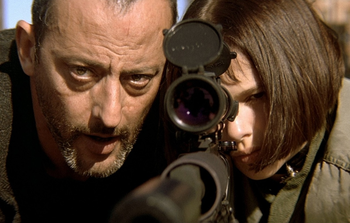 Lu-Tze: That was how it used to be, your reverence. You recall? Master and pupil go out into the world, where the pupil may pick up practical instruction by precept and example, and then the pupil finds his own Way and at the end of his Way—
Abbot: —he finds himself.
— Thief of Time, Terry Pratchett
Advertisement:

A variant of Odd Couple featuring an older veteran character, and a younger novice. Often the former is a Retired Badass who is somehow rendered powerless (or just helpless against current threats) and has to rely on a newbie, who happened to be around and accidentally shows a lot of promise, so they tutor them.

Perfect setup for Red Oni, Blue Oni - the Hot-Blooded younger character is kept in check by their Older and Wiser Mentor.

If they're cops, this is Old Cop, Young Cop. If they're father and son, see Badass Family. If these two are being shipped, that's a Mentor Ship. With magic users, see Merlin and Nimue.

See also Senpai/Kōhai. Master-Apprentice Chain is when this trope is recursed over several generations.