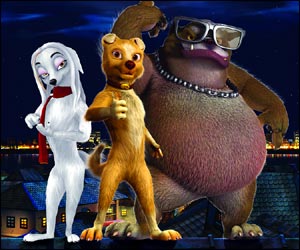 Roadside Romeo is an animated 2008 Bollywood film distributed by Disney (yes, Disney) and Yash Raj Films. It is the second Bollywood film to be released in North America, but only in a handful of theaters.

The film centers around a pampered dog named Romeo who, after being abandoned by his rich owners, is forced to live out in the streets of Mumbai. Romeo is cornered by a street gang and almost beaten up by the crew, but manages to convince them to open a dog grooming business after he lulls them by giving them all new haircuts. Everything's going great until Chhainu, the right-hand dog of a disgusting mobster named Charlie Anna, comes by to collect the business's protection money (in the form of bones). When Romeo kicks him out and refuses to pay, his friends fear retribution, and head over to kiss his ass so Anna doesn't kill all of them. From there on out, the film is about Romeo and his friends trying to escape the clutches of Anna, while Romeo simultaneously tries to woo a dog named Laila, whom he met while dancing on the rooftops, and who he's fallen in love with.