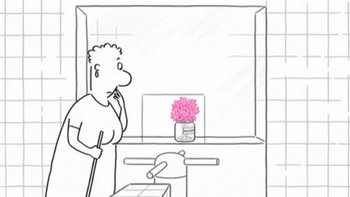 Lavatory-Lovestory is a 2007 animated short film from Russia, directed by Konstantin Bronzit.

A rather frumpy woman works as an attendant at a men's room. She is lonely, seeing pictures of happy couples in the newspaper and dreaming of love. One day, a bouquet of flowers materializes in the jar where the woman collects the coins paid for entrance to the men's room. Who is her admirer? Will she find love?