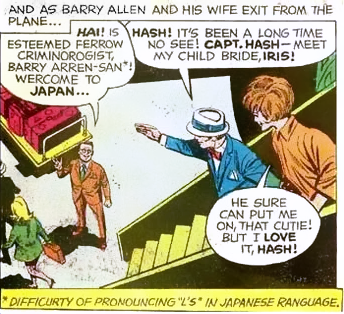 You didn't even notice the bit about the child bridenote or the fact that Hash is not a Japanese name, did you?
"You must understand, Mr. Lucas, that this man is Japanese and he has difficulty getting his tongue round his r's."
— Captain Peacock, Are You Being Served?
Advertisement:

Where a joke is made about pronouncing "Rs" and "Ls" incorrectly in Japanese, or other pronunciations. When this trope is used, the letters are often reversed where the sounds they are making are not ones that would cause that problem—e.g. "R" (when pronounced "are") being replaced with "L", when a long "ah" sound would be more likely.

The above is a bit extreme, but there is some truth to this: Japanese has neither the English R nor the English L - it has a sound that might be best described as a combination between an R and Lnote physiologically this sound does exist in several dialects of English but for psychological reasons sounds quite different: it's the alveolar tap used to make the quick 't' or 'd' sounds in words like "better" or "rider" in North American or Australian accents; one context where it is used to represent R in English is in certain Scottish accents. The way in which this sound is pronounced in Japanese can best be described as a "flicked R", as it requires one to rapidly flick the tongue off the roof of the mouth while pronouncing an "R" sound—think of trying to say "Prince of Prussia" but actually saying "Pdince of Pdussia", leaning a bit more towards "l", if not for the incredible variation it sees in various dialects of Japanese. So, a native Japanese speaker who's not fluent in English can have difficulty telling when to use an R or an L, or will simply use their native R/L sound (which quite often sounds like the wrong letter to an English native) or an L in all cases. The biggest hurdle for Japanese natives is often making the tongue movements necessary for a sound that simply doesn't exist in their native language (equivalent foreign phonemes that English speakers struggle with are things like French 'r'note A uvular trill made with the back of the tongue against the roof of the mouth, somewhat like a rasped 'g', or Welsh 'll' note A lateral fricative made by pressing the tongue against the palate and hissing air past the sides of it). The same is true of Korean - it has Rs and Ls, but these are different allophones of the same phoneme, which is pronounced as an L when it's at the end of a syllable (which doesn't happen in Japanese).

Exactly why the creators of Romanization decided to just use Rs for everything is a mystery for the ages.

There are other "pairs" in Japanese like this, such as V and B, H and F, etc. Likewise, there's no sound for "th" in Japanese, so S sounds are used instead. Unsurprisingly, this is a big hurdle for Japanese natives learning English; e.g., "thunder" is often written and pronounced "sanda", "sander", "sunder", etc. However, this particular example rarely occurs (as a mistake).

Also applied to other Asians — even if the accent doesn't fitnote Though Chinese from certain regions are prone to r/l mistakes as well; in fact, the situation is the opposite in Cantonese, which has the L sound but not the R sound, or with exaggerated accents of their own.

The Japanese L/R can also occasionally sound to English-speakers like a D (specifically, the "tap" that replaces unstressed /t/ and /d/ in North American and Australian English), but not much seems to be made of this in media.

Closely related to Spell My Name with an "S". Often used as part of Asian Speekee Engrish or Intentional Engrish for Funny. And, of course, one must be careful talking about this or invoking it deliberately, as doing so can come across as intensely racist. (Which it is, fundamentally.)

This sort of problem can occur in non-Asian languages as well. In Spanish, both "V" and "B" are pronounced like the English "B" (except between vowels, in which case there can be a sort of subtle cross between the two that doesn't exist in English - and that most Spaniards eschew anyway as soon as they leave kindergarten). It goes to the extent that many native Spanish speakers have a hard time differentiating between the two in their own language, and this can become a trouble when speaking English. Curiously, Japanese also has this exact issue in addition to the L/R thing. Also, Arabs struggle to pronounce "P" and "V", replacing them with 'B' and 'F' respectively — see more on Arab Beoble Talk. Central and Eastern European languages can have a similar problem with "V" and "W" — see Vampire Vords.

Generally it's an honest mistake; the humor comes from onlookers. Words in katakana are spelled phonetically with a set of standard characters which ignore the original non-phonetic spelling. When the word in katakana is transliterated normally, it may be unrecognizable. The translator must have a good understanding of how the word is spelled in both katakana and the original spelling. This becomes especially difficult with completely made up words, leaving the translator to interpret the correct spelling of a word that may have no correct spelling (or be vaguely similar to an existing word). Alternatively, they can pray an official transliteration appears eventually. Usually it does, but not always! Sometimes not for years even for major works (Transformers has this problem), and basically never for many smaller works (such as obscure one-off OVAs). This can result in the interpretation ending up totally different from what was intended.

When a Japanese character can speak English perfectly, but talks like this for the reason of Obfuscating Stupidity and/or for amusement, it is Elective Broken Language.