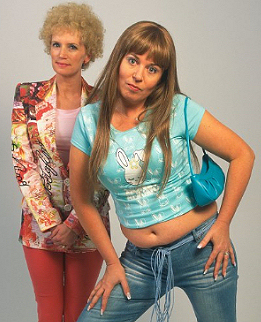 "Foxy morons"
Kim: I want to be effluent, Mum, effluent.
Kath: You are effluent, Kim.
Advertisement:

An Australian comedy show created by Gina Riley and Jane Turner, which premiered in 2002. It ran for four seasons, as well as a special Christmas episode entitled 'da Kath and Kim Code' which aired on Christmas day 2005. It follows the family relationships and mishaps of title characters Kath Day, and her daughter Kim Craig, along with Kim's second best friend Sharon Strzelecki, Kath's fiance (then husband) Kel Knight, Kim's estranged husband Brett Craig, and in later seasons, Kim and Brett's daughter Epponnee Rae.

Brought across the Pacific for an American version in 2008, which only lasted one season and wasn't too succesful (though it did get released on DVD)

The show received its Grand Finale in the form of the 2012 film Kath & Kimderella.